The effect is a loss of civility, and an erosion of constitutional rights, rather than a building of good will. ~Timothy Lynch

This is about conditioning – desensitizing the people to domestic militarization. Not many things are all good or all bad, but weighed in the balance, this seems like a very bad trend. Here are two good articles with some background and recent opinions on where this is leading.

I might add, that though the police departments are acquiring this equipment at low or no cost, the people paid full price for it when it was new, and continue to pay for its exorbitant up-keep. We own it.
DCKennedy

[The police force of Erie, Pa., has worked to avoid that perception by taking its BearCat out into the community. SWAT team commander Lt. Les Fetterman told The Daily that his department took the armored vehicle to a city picnic, where “a couple hundred inner-city kids” played in and around it.”

Most of the people, they see it — it looks, I don’t want to use the word, intimidating — so you get some stares,” Fetterman said. “But it’s actually become a community relations tool … It’s an ice breaker, like a firetruck when they take it to parades.”

For some critics, though, the concern is not alienating neighbors, but the change in attitude of police themselves.”]

Arthur Rizer, a Virginia lawyer who has served as both a military and civilian police officer, stressed that their outlooks and missions are fundamentally different.

“If we’re training cops as soldiers, giving them equipment like soldiers, dressing them up as soldiers, when are they going to pick up the mentality of soldiers?” he asked.

“If you look at the police department, their creed is to protect and to serve. A soldier’s mission is to engage his enemy in close combat and kill him. Do we want police officers to have that mentality? Of course not.”

The second article is, When the Police Go Military, by AL BAKER.

“The Posse Comitatus Act of 1878 generally bars the military from law enforcement activities within the United States. But today, some local and city police forces have rendered the law rather moot. They have tanks — yes, tanks, often from military surplus, for use in hostage situations or drug raids — not to mention the sort of equipment and training one would need to deter a Mumbai-style guerrilla assault.” 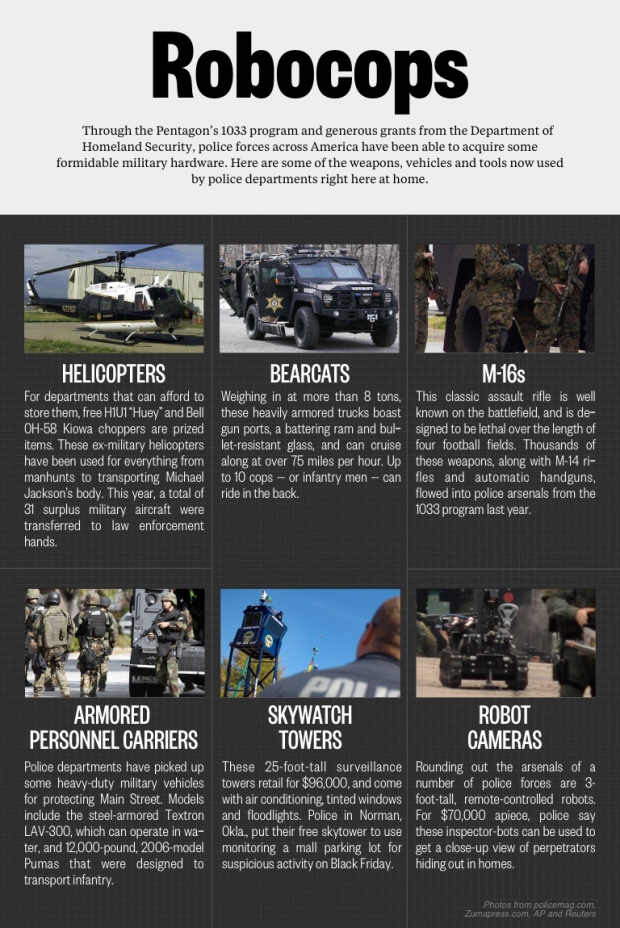 This NYT graphic, Riot Gear’s Evolution, shows the about-face change since 1995 in what had otherwise been progress in communication and cooperation with the people of America.