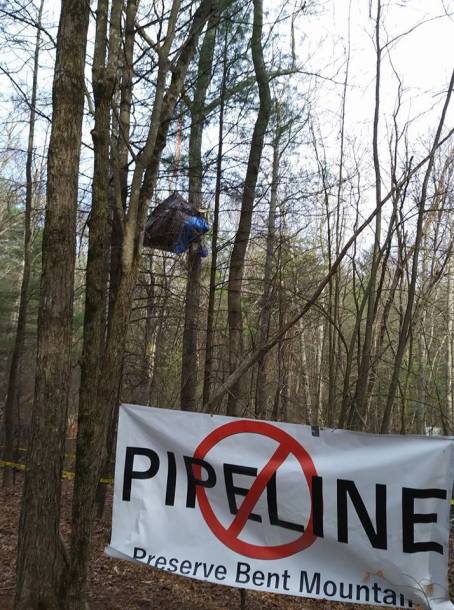 This is the way the world ends….

The maddening thing about the pipeline discussion, of course, is that it shouldn’t be happening at all.  People who understand the science do not entertain the idea that even a little pipeline would somehow benefit Virginians, much less the dual monster pipelines – the Mountain Valley Pipeline and the Atlantic Coast Pipeline– that are daily discussed with the feckless calm of oblivious passengers sipping martinis on the Titanic.

Late in the evening, I try to work up metaphors that can adequately capture the insanity of this moment. I keep coming back to an old New Yorker cartoon: man in disheveled suit, sitting beside a group of other survivors around a campfire in some obviously post-apocalyptic landscape.

“But for a brief, shining moment,” says the man in the suit, “we managed to create enormous value for our shareholders.”

I suspect this sums up the position of Dominion Power, EQT and other investors in the Mountain Valley and Atlantic Coast Pipeline projects, and apparently our own state government from the Governor on down to the Department of Environmental Quality and the State Water Control Board. Heedless of the demonstrable long term and short term damage such pipelines will cause to the environment, and ultimately, human civilization, these corporate and state entities use every possible legal and political weapon to advance the pipelines’ construction. It’s as if they live on a different planet from the activists I know who are increasingly alarmed by the obfuscation and outright lies being handed to them by state government at almost every level.

I had an opportunity to talk with some of these activists over the weekend and they were justly infuriated at the latest dodge by the State Water Control Board. Especially, the most recent move not to revoke MVP’s permit. Here’s a little background.

Before construction started for the Mountain Valley Pipeline in 2017, the State Water Control Board, under Virginia’s Department of Environmental Quality, (which ostensibly has authority over the project), voted 5-2 in December 2017 to certify the project’s path through Southwest Virginia, finding a “reasonable assurance” that digging trenches for the massive buried pipe along steep slopes would not contaminate nearby streams and rivers.

But, according to the Roanoke Times, in August, the Department of Environmental Quality found multiple failures of erosion and sediment control measures. By December 2018, the board decided to take the unprecedented move of convening a hearing to consider revoking MVP’s certification, one of several permits that allowed construction of the 303-mile pipeline through Virginia.

Rather than carry through with the revocation, based on over 300 violations that the Mountain Valley Pipeline had rung up in the previous year, the State Water Control board decided to undo that process last Friday, March 1st.

On a unanimous vote, the State Water Control Board withdrew its earlier decision to hold a hearing to consider revoking the water quality certification it issued for the pipeline in December 2017. Coming after a four-hour closed session, the vote shocked and angered activists.

“Shame on you!” One pipeline opponent shouted at the board members as others joined in. “Shame! Shame! Shame!”

Several people were escorted out of the room.

One board member claimed they did not have the authority to revoke federal permitting for the MVP. Another was concerned about what they saw erosion-wise while visiting the pipeline right of way, but wasn’t concerned enough, apparently, while yet another board member promised “vigorous enforcement” of the requirements MVP agreed to for controlling soil erosion and runoff.

According to one activist, officials from the Mountain Valley Pipeline told DEQ that they would continue with construction regardless of whether their permit was or was not revoked, and the State Water Control Board decided that they would leave the permit in place. It remains to be seen whether the State Water Control Board and DEQ will enforce any of the permit conditions, or whether the suit brought in early December against MVP by Attorney General Mark Herring will have any effect on a corporation that says it will continue to do whatever it wants.

Those are the public stories, presented for the average reader, skimming lines of newsprint, not aware that this decision, along with hundreds of others like it, are sealing their children’s fate, such that, within the next 100 years or so, life on earth, as we currently understand it, will be a remote, idyllic dream.

The backstory, if you are interested in how civilizations are destroyed by the callous and the powerful, comes from a sweet little political maneuver by Governor Ralph Northam.

The terms of two members — one who voted for the pipeline and the other against it — expired, and their replacements accounted for the flip in the panel’s position.

Roberta Kellam was the member who was deeply concerned about the pipeline’s violations.  She was subsequently replaced.

In an op-ed to the Roanoke Times, she wrote:

“Based on what I observed along 30 miles of MVP construction, it continues to be unclear to me why the DEQ has not instructed MVP to stop work in accordance with its authority.

“My tour of the MVP corridor traversed areas of very steep slopes, floodplains and freshwater wetlands. I observed situations that were clearly a threat to water quality, such as unprotected steep slopes, pipeline segments floating in water and erosion and sediment control measures in disrepair.

“But what struck me even more than the environmental impacts was meeting the people dealing with the pipeline construction and its failed erosion control measures on their own properties — farmers and other land owners who graciously invited me to visit their properties and see for myself.

“It was clear that many people felt that DEQ was not protecting their water quality to the extent promised during the water quality certification hearings and that they had lost faith in the DEQ.

“From time to time during 2018, I saw photographs taken by local residents of situations on the ground that appeared to threaten water quality.

“In response to my inquiries about site conditions, I was repeatedly told by DEQ Director David Paylor that the local residents are “untruthful” and their photographs were “misleading.” In the week before Hurricane Florence, when weather forecasts indicated potential catastrophic rainfall in the region, Director Paylor told me that work had stopped even though video and photographs provided by local residents showed otherwise.

“When I further questioned Director Paylor about apparent water quality impacts, he accused me of “working for the opposition” with such ferocity that I felt compelled to defend myself in writing, referring to our responsibilities to protect water quality.”

Perhaps unsurprisingly, Roberta Kellam’s replacement, James Loften made the motion to hold the hearing that ended up affirming MVP’s permit. The motion was supported by Paula Hill Jasinski, a newbie appointee as well, who was attending her first formal board meeting.

In lieu of revoking the permit, some pipeline opponents called for immediate stop- work action. Said Lara Mack, Virginia field coordinator for Appalachian Voices, “We now call on the DEQ to do what’s necessary — and has been necessary for months — and issue a stop-work order for the Mountain Valley Pipeline.”

According to Melanie Davenport, DEQ’s water permitting director, there is no need for such a stop work order, because many of the 300 violations have already been mitigated or don’t rise to the level that would require work to stop. But that’s not what Roberta Kellam or any of the activists on site are saying. Quite the opposite. Each new day of construction brings new environmental damage, new runoff, new water pollution.

All this happens within the small bubble of state law, state environmental experts and an enormously influential and powerful state utility. Yet, the stakes in Virginia pale by comparison to the larger stakes at play, of which Virginia is just a microcosm. In other words, Virginia is just one more nail in the global climate coffin we are building for ourselves. That it is a coffin is indisputable. The most recent IPCC report makes it eminently clear that to build anything like a pipeline to carry natural gas is a bad idea. Building massive infrastructure to produce slightly less carbon and slightly more methane (another greenhouse gas) is, at minimum, a dysfunctional tradeoff.  It’s not nearly as effective as building a true carbon free infrastructure (solar, wind and other renewables) posited by something like the Green New Deal. What’s worse, environmentalists are concerned that continued pipeline approvals will lock in U.S. dependence on fossil fuels for decades to come.

“Building pipelines that are not needed will lead to billions of dollars of stranded assets and slow down our process to building cleaner energy solutions,” Gillian Giannetti, an attorney with the Natural Resources Defense Council, said.

With the rapid decline in the cost of renewables, the economics of building gas pipelines that are meant to last 40 to 60 years no longer adds up, Jonathan Peress of the Environmental Defense Fund said. “In 15 or 20 years, it is clear that alternatives to gas are going to be more economic than building pipelines, but yet these pipelines will still be under contract, people will still be paying for them,” he said.

Similar sentiments were expressed by former FERC chair Norman Bay, who warned of overbuilding the pipeline system and burdening future ratepayers before he stepped down from the commission in 2017.

Since 1999, FERC has approved approximately 400 natural gas pipeline projects while rejecting only two. Under current Republican control, FERC is, in the words of many activists, a rubber stamp agency. When the Governor defers to FERC authority over DEQ, he is simply rubber stamping the pipeline’s approval, while trying to avoid political heat. All of which adds up to more carbon, more methane and more global warming.

According to the IPCC’s most recent report, the future disasters predicted for ten years down the road, are already here. We are already “experiencing the impacts of rapid and unequivocal global warming: coral reef decline, sea level rise, Arctic sea ice loss, biodiversity loss, declining crop yields, more frequent heat waves and heavy rainfall.” It will get much, much worse,  not within a hundred years, but within 5, 10 or 20 years, such that, if you have young children, the politic decisions made now, behind closed doors, for the advantage of a handful of short sighted and powerful individuals, will likely seal your children’s lives and the lives of their children for generations to come. History will judge these politicians and corporate chiefs harshly, as well they should.

Dominion Power CEO, Tom Farrell; Virginia Governor, Ralph Northam;  DEQ  Director, David Paylor. Just a few names that will ring in infamy as future generations learn of their grotesque behavior. I’m sure there will be more added to the list, but for now, this will suffice. They should all be ashamed.