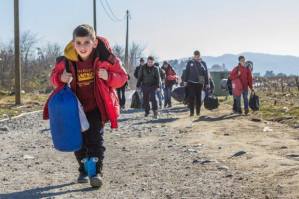 Five years ago, I was on the island of Lesvos, Greece, as the first Syrian refugees floated in from a nearby Turkish coast. Lesvos was one of the ‘red’ islands that for a short period was filled with ‘Godless’ lefties before a right wing military coup took over Greece circa 1950 and murdered about 50,000 communist party members. Things, of course, had simmered down by the time I visited that morning five years ago, but the IMF austerity regime was causing real pain in the economy and unemployment, always bad, was spiking even further. On top of this, refugees were flooding in from Turkey, across the Aegean on leaky fishing boats and makeshift crafts. I talked with survivors of an overturned raft, some half dozen had drowned, including a nine-month old infant. It was a tragic story, but hardly an Earth shattering event for a Western press accustomed to bombings in Syria, and primed for even the slightest hint of chemical agents; as if death from nerve agent were somehow more deadly than death from salt water drowning.

There were hundreds of refugees at that point in dire need of food, water and shelter. The Greeks, as always, did what they could, even with the IMF tightening an already vicious set of austerity measures. That’s because the Greeks, as always, measured things in human terms. If the press had spent a few days walking with the refugees or talking with the volunteers at the rescue centers, they may have found an enormous capacity for compassion amongst the ever hospitable Greeks, even while suffering some fairly severe depredations themselves. I don’t think this is a quality singular to the Greeks, by the way. Although it was plenty in evidence that summer, I think it can be found where ever humans comfort each other in times of need.

In our country, we’ll find that spirit after hurricanes pillage our communities. I know folks on the far left who have traveled to the heart of rural North Carolina and lent a helping hand after Hurricane Florence pulverized the state. I still remember a post I saw from one of the leaders of that rescue effort gently chiding her fellow volunteers to look beyond cultural and political differences and simply lend a hand. Don’t proselytize while you’re handing out sandwiches, water bottles and sleeping bags, she suggested. I know a few churches that could use that advice.

Others on the left I know will offer sanctuary to those who are fleeing from horrific events farther from home. For example, the Unitarian Church of Richmond has recently opened its door to a Honduran refugee fleeing domestic violence; one of the first ‘Sanctuary churches’ in the state of Virginia. Cities, typically ‘left’ leaning cities, have declared themselves safe or sanctuary zones for immigrants for years now. They do this not because they are ‘un-American’ or wish to cause damage to the country. Quite the opposite. They do it out of respect for what is best in the nature of our country; its openness, its generosity, its willingness to take risks. In that way, the left in this country is very similar to what I saw in the attitude of the Greeks, a compassion for those less fortunate, even as measured by the thin rod of an IMF impoverished citizenry.

In the last few weeks in this country, the left has been the target of some extremely violent actions, pipe bombs by mail, a deadly assault in a grocery store, and the devastating slaughter last Saturday in a Pittsburgh synagogue. As Paul Krugman notes, the man arrested at the Tree of Life synagogue had been critical of Trump for being insufficiently anti-Semitic. Bower’s rage seems to have been fueled by a conspiracy theory that Jewish financiers are bringing brown people into America to displace whites.

This conspiracy theory is, it turns out, a staple of neo-Nazis in Europe. It’s what our own neo-Nazis — whom Trump calls “very fine people” — were talking about in Charlottesville last year, when they chanted, “Jews will not replace us.”

It’s also the barely veiled subtext of the manufactured hysteria over the caravan of would-be migrants from Central America. “The fear mongers aren’t just portraying a small group of frightened, hungry people still far from the United States border as a looming invasion. They have also been systematically implying that Jews are somehow behind the whole thing. There’s a straight line from Fox News coverage of the caravan to the Tree of Life massacre.”

I suppose this is in keeping with the general disinformation fomented about the left in the U.S. For decades now, of course, the terms liberal and left and more recently ‘progressive’ have all been derided as being somehow ‘unpatriotic’ or ‘reckless’ or ‘lazy’ or ‘weak’ or ‘feminine’…In fact, it’s difficult to keep up with all the wildly varied characterizations, but they miss the qualities that make up the progressive left that I know: smart, brave, determined, and generous. Exhaustingly so. I’m not talking about money, or the wealth of George Soros, bless his dreadfully abused name, I’m talking about generosity of time and effort.

From activists sitting in tree tops to stop ill planned pipelines that threaten our world, to the BLM protestors and sport figures taking a knee in solidarity, to the youngsters who have traveled into the heart of hurricane disasters to provide relief to citizens who didn’t agree with them on a single political issue, the left I know is generous and caring. If there’s a fault to be found with them, it’s that they are too much in accord with what the New Testament recommends to survive well in these pitiless times. And yet, that’s also their strength and why I take heart, even as Trump and his acolytes use the ‘caravan’ to stoke an unjustified anger at the left.

I suspect the tactic will fail, but if we must talk about this caravan, let it be in human terms. If it is anything, it is a simple test of our humanity. On one side you have a group, fleeing desperate conditions in Honduras, created in no small degree by our own meddling in that country’s affairs, (when we supported the coup against Honduran President Manuel Zelaya in 2009. Honduras has since seen it’s murder rates increase by over 50%, becoming the murder capital of the world). At worst, these people are seeking a better life in our country through the legal process of requesting asylum. On the other side, you have a billion dollar military, armed to the teeth through a military industrial complex maintained by ensuring each state representative gets to bring home a percentage of the allocated military budget to his own home district. The leader of this pharaoh’s army is Donald Trump; a known liar, casino hustler, adulterer, and a con man. Many on the Christian right don’t deny this, but still vote for him, despite the glaring hypocrisy, saying things like, ‘sometimes God uses bad people to do good things.’
Indeed, but if we take that to its logical conclusion, God’s plan ‘to use bad people to do good things…’ ends with the right wing emboldened by a population of Evangelical Christians acting maddeningly unchristian, justifying the worst crimes imaginable: murders of celebrants at synagogues, bombings across the country, selfish retaliations at borders, like matching a billion dollar military against a an impoverished people struggling for survival, all in God’s name.