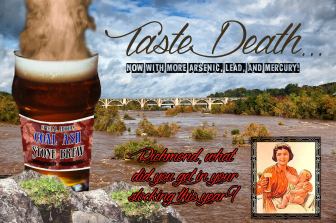 I wonder what the folks at Davos are saying about the water in Flint, Michigan? Davos, if by some miracle you haven’t heard, is a Swiss mountain village where CEOs, hedge fund managers, economic leaders, political heavy weights, and a few celebrities meet to discuss the big issues of the day. Sometimes they come away with actual solutions to intractable problems. Mostly, though, they reaffirm their commitment to making deals and carrying on the neoliberal agenda for the world economic order by which they have grandly profited. This is why I suspect their conversations won’t really embrace the whole Flint, Michigan phenomena in all its seedy detail.

“Did you hear about the people of Flint?”
“The who? I don’t see ‘Flint people’ speaking at any conferences. Is it a new band?”
“No.”
“A restaurant?”
“No. Flint people are people who live in Flint, Michigan.”
“Michigan? Sounds dreadful. No ski slopes for miles.”
“Well, actually, what they need isn’t ski slopes. It’s water.”
“Water, really? Excellent. I have contacts at Nestle’s. We’ll send them high quality bottled water, tout suite!”
“I don’t think that will work.”
“They would prefer Pierre? Fine, I know an old fraternity friend who runs their import division. I’ll just reach out to him and we’ll set things straight, pronto.”
“No, no, no, no. They have water, it’s just been poisoned.”
“Poisoned? How very de Medici. The entire water system? Amazing. That sounds like the makings of a Hollywood thriller. Which terrorist group was responsible? ISIS? Boko Harem? Maybe we can get Kevin Costner on the project?”
“Actually, it wasn’t a terrorist organization at all. It was Governor Rick Snyder, and his emergency manager.”
“You don’t say. Well, I’m sure he had an excellent reason. You don’t go poisoning an entire city without good cause.”
“He wanted to save money.”
“The very best reason! We simply cannot be lavishing money on entire cities after all. Especially those darker cities if you catch my drift.”
“I do, but I suspect the move was ill advised. Now it’s come out that the children of Flint are suffering from lead poisoning and Rick Snyder is requesting federal emergency funds to bail his city out.”
“Oh, dear, more money! Tut, tut, it’s apparent to me that dear Mitch didn’t handle this crisis effectively. I have a PR firm—Burson-Marsteller– that can handle such things. Let me get them on the horn.”
“It’s too late. It’s already in the national news.”
“Oh that is dreadful. Nothing can be done, then.”
“Yes, yes it’s bad. Very bad. Mitch will be in for a rough ride. Yes, and I hear the children of Flint are dying, too.”

Of course, this is an imagined scene. I seriously doubt a conversation of even this short length would take place at Davos about such lowly concerns as Flint, Michigan’s water problems. Or Virginia’s water problems for that matter. In fact, there’s an excellent chance you haven’t heard about those issues either; because no one has died of them… .yet. But if you’re a Richmonder, you should probably know that on January 14th, the Virginia State Water Control Board approved permits that allowed the Dominion Virginia Power company to discharge water from coal ash ponds at Bremo Power Station, roughly 50 miles upstream of Richmond on the James River, and the Possum Point Power Station, located 30 miles south of Washington, D.C., at the confluence of the Potomac River and Quantico Creek.

Now there are a few things for us to keep in mind about this which our Water Board apparently didn’t. Residue from coal ash contains heavy metals like arsenic and mercury so there are significant environmental as well as health impacts to citizens downstream. Citizens in Richmond, Virginia, to be specific.

The odds of a Richmonder attending Davos are slight, but if someone from Richmond did attend, they are likely to be heading a big company, like Dominion Virginia Power for example.
Maybe next year or the year after, we’ll be able to imagine another conversation at Davos. Something along these lines…

“Did you hear about the people of Richmond?”
“The people of where?”
“Richmond, Virginia, darling. Oh, you haven’t heard of them? Well, you see, Richmond was an up and coming city. They were making quite a name for themselves as the river city of the East Coast, best urban white water rapids anywhere in the continental U.S., actually. They had a vibrant art scene and really wonderful restaurants. Foodies and creatives all over the place. And lots of tattoos. But then Tommy Farrell, you remember Tommy, don’t you?”
“Why, yes. Tommy and I used to play Mahjong together all the time! Heads that power company now, doesn’t he?”
“Yes, Dominion. Well he decided to bend a few legislative arms to get out from under some testy environmental regulators. You know Tommy had most of the Virginia General Assembly in his back pocket. He’s heaped about $1.6 million to statewide and legislative candidates since the start of 2013, so it’s no wonder some back water agency decides to do his bidding. Anyhow, it turns out pouring arsenic and mercury from old coal ash ponds into the drinking water for an entire city was not such a grand idea.”
“What happened?”
“I don’t want to go into the details—they are…graphic. Let’s just say Tommy never learned anything from Rick Snyder.”
“You mean this made the national press, as well?”
“Yes. And it killed Richmond’s chance to be a first tier city. Who wants to live in a place where you can’t trust the drinking water, after all? There’s only so much Pierre in the world to go around.”
“Pity…. Poor Tommy.”
“It’s like that old Rime from the Ancient Mariner, do you remember that? We had to memorize the thing in our prep school days. How does it go again?”
“Something, something…’Water, water everywhere. And not a drop to drink’, that’s it, isn’t it?”
“Yes, that’s it. Say have you tried these canapés? They are amazing!”