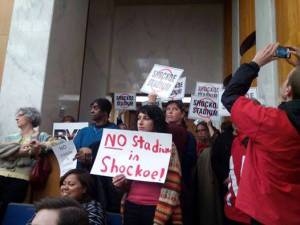 There are times when the best way to understand a phenomena is to tell it slant, suitably dressed up in fictive garb lest the venality of the topic (and persons represented) put us off understanding altogether. City Council and the Mayor’s machinations in the last week or so is such a time. Last week, City Council voted 5-4 to strip the Mayor’s proposed 13 million for improvement to the bottom to make way for a stadium, and reallocated those funds for public schools and city infrastructure. A blow to the Mayor’s plans! But then, Monday, May 12, at an early afternoon budget meeting, City Council effectively reinstated those same funds, less 3 million for Richmond Public schools. Whether this will stand or not remains to be seen, and the forthcoming weeks will be decisive in determining where, exactly, a base-ball stadium will be built, or if there will even be one. To lighten the anxiety, and guard our dear reader’s sensibilities we thus present an encore of Happy and Hal who first made their appearance in a previous episode of our blog. Unfortunately, as we have seen, the play did not end there, and did, as promised, continue:

Signs reading “Loving RVA” adorn the windows and walls of a bar in Shockoe Bottom. Happy and Hal sit in deep consultation at a side table while drunken guests stumble by. Occasionally someone yells, “Three Cheers for Baseball in the Bottom!” and the crowd roars their approval.

Happy: Sure, so long as we supply the drinks.

Hal: Why so glum? It’s a great idea giving out free drinks to boost the stadium plan. This is the future I envision for the bottom, Happy! I am here surrounded by my dream demographic. Rich singles, unfettered by cares of raising children and the like, focused solely on immediate gratification. That’s my kind of living. Eat, drink and be merry –the perfect thought-free lifestyle for the condos we will soon build.

Happy (philosophically): You know, even with all the good I’ve done for this city, even with Redskin fans cheerfully enjoying their training camp six weeks out of the year, our city still has problems.

Happy: Worse than that.

Hal: Worse than that, really? I heard it was pretty bad. One of the school board members said she wanted to throw up. How much worse can it get?

Happy: How much worse? Pfft, those kids were just bellyaching. What do they know about sacrifice? About setting priorities? 4 years, 5 years, they’ll be gone, but the city will still be here. You get me? We’ve got to think long-term. That’s why this thing I’m about to tell you is so much worse than a bunch of kids crying about tar water and snakes.

Happy, lowering his voice: Some schlep developer in Chesterfield made a counter offer.

Hal: What? A counter offer!

Happy: Shh, keep your voice down.

Happy (whispering): It gets worser…

Hal: How much worser??

Happy: Glancing around the bar, nervously …the offer is….promise to keep this a secret?

Happy: Okay. The offer is free.

Happy: Right, the city would pay nothing.

Hal: Free…(angry as he realizes the import of these words) Oh, Jesus Mother of God! You’re joking, right? That’s un-American!

Happy (Shaking head, sadly): No, the pitch is to build the stadium on the Boulevard from entirely private funds. No city funds involved.

Happy: I’ve decided to respond in the only reasonable fashion. I had my man Jack Berry on Venture Richmond rip this yokel a new one.  Giving away a stadium! Who ever heard of such a thing? We accused him of being disrespectful of city leadership. We called him divisive, a hypocrite and a liar!

Happy: We’re not going to let anybody shove a free stadium down our throat! We have self-respect here in Richmond!

Hal: Here, here! I like the way you think, Happy my man! That is just excellent!

Happy: (lowering drink, thoughtful)…Yes, Hal, and that seemed to work, up to a point… they withdrew their offer,  but then, the other shoe dropped…City Council decided to strip my budget of all funds for the stadium plan to go forward. 5 to 4, can you imagine?

Happy: (to himself, staring vacantly at an overhead TV screen) Yes… It is as the scripture says, dear Hal, vanity, vanity, all is vanity.

Hal: (nodding soberly) That it is, but I think it’s more of an emptying sensation. I see zeros fleeing my bank account before my eyes.

Happy: It is a short walk from the hallelujah to the hoot, Hal, that is all I am saying.

Hal: (glancing at the overhead television where Happy is staring) What is that anyhow?

Happy: City Hall news. Since that mess about the schools, and the vote, I want to keep close tabs on them. See, the way it is, I am like Jesus Christ and they are like my apostles. You follow me? But of late, I am concerned that I may have a Judas or two…

Hal: I told you, you should have bribed them…A million here, a million there, makes it hard to say no.

Happy: Well, City Council did say no. After those young pups protested their lousy schools, City Council stripped 13 million worth of funding for the stadium in the bottom. I’ve never been so mad in my life. And hurt! After all I’ve done for them!   I thought I was going to kick.

Happy: Like a death-blow. …but…. (lights dim in the bar, crowd grows quiet and music begins –the harmony for “My Way”)

Happy: The end was nigh.

Hal: The end was nigh.

Happy: All we could do.

Hal: Was quiver or cry!

Happy: Yet there was this; some meager chance to make them feel my political lance. I told them straight, you screw with me, you’ll need six votes, or I’ll be free. I’ll veto everything you try to pass. I’ll be on you, like green on grass. And when you fail to override, you’ll get my budget, and then you’ll cry. And that next day, they folded their hands. They dropped their cards…. Yo, Hal, I kicked their cans!

We lost three million, but ten million saved for the stadium that’s here to stay! And why is this?

Hal: And why is this?

Drunken girl: Yeah, why ish this?

Happy: Because….. I did it MYYYY WAAAAAY!

Drunken Crowd chorus:  He did it HIS WAAAAY

Hal: So everything is set?

Happy:  You’re in Real Estate, Hal. You know nothing is set until the deal is closed. The next few weeks will be make or break. That 10 million can get reallocated pretty quickly too….we’ll need all our folks here out in force — our drunken empty nesters need to make their needs known, or else those students might come back with more demands for safe schools. Or someone else might come up with another scheme for the stadium. It sends shivers down my spine to imagine all the better ideas that are out there. That’s why it’s up to us to keep them drunk and happy, Hal, so they never question our motives or our numbers.  And a prayer or two might help.

If you want to help activists trying to stop baseball in the bottom, here’s a handy link:

Here are relevant  upcoming committee meetings thanks to Scott Burger:

If you’re interested in learning more as this story unwinds, here are some other resources and local articles.