That In Aleppo Once 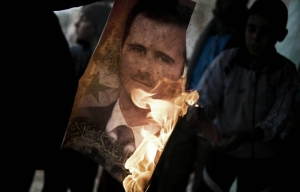 For readers who’ve enjoyed Nabokov’s “That In Aleppo Once”, the similarities between the narrator’s situation and the current morass in Syria are striking. To quickly summarize, newlyweds are separated before the German’s storm France during World War II. They are rejoined in Aleppo where the wife tells a series of fantastic stories each either a lie or a dismal truth. During the separation she tells her husband she has taken a lover, or no, not just one lover, but two, or no, she has lost count, or then again, she has not taken a lover at all. Finally, she abandons the husband spreading even worse accounts about him—he’s a brute, she claims, who has chained her to his side, and furthermore has hung her favorite dog, which – if the narrator is to be believed—has never existed!

The ending does nothing to resolve the issue and the reader is left with the ultimate coin toss as to who should be believed. It’s a testament to Nabokov’s skill that the reader is not disgusted by the seemingly pointless excursions, but rather intrigued. Alas, it’s at this point where the similarity with Syria and our own feckless politics breaks down. In following the turns of the current Syrian ‘war’ story, there are multiple accounts of events and it’s nigh on impossible to determine which are ‘real’ and which are fantastic, or, more to the point, deliberately fictionalized.

There are reports that the Syrian regime used chemical weapons (sarin, a nerve agent) against its own population. There are also contradictory reports that suggest the rebels used said chemical weapons in an effort at garnering international support. There’s also the possibility that a ‘loose cannon’ in Syria’s regime used chemical weapons against the rebels. Or possibly an outside agent used chemical weapons in the hopes of dragging the international community into the war. Any one of these with slight variations may be true. Our signals intelligence leans toward an assessment that suggests the Assad regime is the culprit. But this rather muddies the water because our signals intelligence relies on our allies in the region. Our main ally in the region happens to be Israel who, frankly, does not have a good reputation for being an honest broker in matters of war and peace—especially in the Middle East. It’s very much in Israel’s interest to depose the Assad regime. Looked at in the long view, Israel’s main enemy in the region is Hezbollah. They drove the Israeli army out of Lebanon and have been instrumental in keeping them out of Lebanon since 2006. Hezbollah receives support from both Iran and Syria. In fact, Syria offers the main conduit for weapons to flow from Iran to Hezbollah which makes striking Syria an especially attractive option. In the United States, the neocons are well-known advocates of striking Syria, and they are also, incidentally, huge fans of Israel’s bellicose foreign policy. One might say they have never met a war they didn’t like. These are the same belligerents who lolled us into the Iraq debacle on assurances that Saddam Hussein had ‘weapons of mass destruction’. At the time, they were lying, of course. They may be lying now.

When lawyers prosecute a case they look for actual evidence tying the perp to the crime, but they also look at other factors: namely, motive and opportunity. When motivation and opportunity are rolled into the analysis, the picture in Syria becomes murkier. Who would benefit by a chemical weapon strike in Syria at this particular moment? Surely not the Syrian regime, well aware of the so-called ‘red line’ the US declared not two months ago. What would possess them to unleash a chemical weapons attack, especially when they are currently holding, if not gaining ground against the rebels? With the entire international community watching?

Besides, our intelligence ‘reports’ have been misused so egregiously in the past that even if motivation and opportunity weren’t a factor, relying on them alone would be ridiculous. It’s not just the most recent Iraqi invasion where multiple lies were told by multiple administration officials multiple times. We should remember the fabrications around the Gulf of Tonkin resolution in Vietnam (released NSA documents indicate that the August 4th, 1964 attack – the pretext for our ‘police action’ in Vietnam–did not happen ), and more recently the stories that led up to the first Gulf War of babies tossed out of Kuwaiti incubators by the Iraqi military. This was also a lie, perpetuated by Nayirah al-Sabah, the daughter of Saud bin Nasir Al-Sabah, the Kuwaiti ambassador to the United States. Turns out, her testimony was organized as part of the Citizens for a Free Kuwait public relations campaign which was run by Hill & Knowlton for the Kuwaiti government (Hill & Knowlton, incidentally, is currently helping out the fracking industry with their PR needs. Small world). Nevertheless, at the time her testimony garnered the necessary national outrage stateside to let George H. Bush carry out the first Gulf war. Given this history, no one should put much credence in another ‘slam dunk’ speech; and until we have an independently verified analysis from a relatively objective source (like, say, UN inspectors) the cries for a strike against Syria should be met with the deepest skepticism.

True, lives are in the balance. Hundreds of innocents have died horrible deaths, but it’s hard to reconcile a missile strike killing more Syrians as a suitable solution to those that are already dead. Who benefits? The question is especially compelling when we consider that Israel, which had provided much of our signals intelligence in the region, has both the motivation and opportunity to lie us into war. Certainly, if we’re interested in ‘justice’ or ‘deterrence’ or for that matter the humanitarian fallout, the least awful option is to bring the case before an international tribunal as a war crime, and let the cards fall where they may. If the case against the Assad regime is legitimate, then the evidence should be able to stand on its own.

Unfortunately, the basis for our actions in foreign affairs, our intelligence ‘street cred’ has been deeply corrupted by those who claim to be most concerned about our ‘credibility’ on the world stage. “Won’t get fooled, again” said Bush nearly a decade ago. At the time, he and the neocons were busy fooling us into war, and mutilating a Who song in the bargain.

The old adage about crying wolf still holds. In the end of Nabokov’s story, the wife in Aleppo is abandoned— not because of the lovers or non-lovers– but because the narrator can no longer believe a word she says.