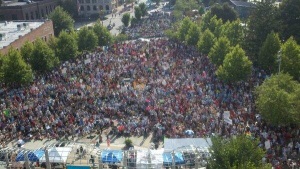 There’s a certain perverse pleasure in waiting to see what disastrous policy initiatives Republicans can develop, like watching a Jerry Lewis movie. You enjoy the unwinding disasters, almost in disbelief, just waiting to see how bad it can get. Attempting to repeal Obamacare for the 50th time, for example, when we come in dead last for healthcare outcomes among all developed nations…. That’s something, really. It requires a kind of supreme lack of imagination. We endure the worst rates of heart disease, lung disease, obesity, and diabetes among all the developed nations on Earth. We are last in positive outcomes, but we spend the most–outstripping all rivals in flushing money down the insurance toilet without any actual return on investment (or ROI, as the smart MBA kids like to say). So the natural conclusion for the conservative movement is to repeal anything that would correct that situation, right? All this might suggest that the right doesn’t actually care about outcomes, or maybe it’s some unfathomably clever political ploy. Like how, every six months or so, they actively seek to plunge our economy back into an ice bath by holding the debt ceiling hostage. Or again, maybe it’s just the right gone wild in their usual productive cycle of ginning fake outrage over fake scandals (Benghazi! IRS!) and destroying any attempt at a sane economic policy which, I have to admit, is par for the course. After all, our band of antediluvian brothers’ idea of economic progress is to repeal the minimum wage.

Yet, there are moments when even a cynic must pause. Ten years ago, for example, would anyone have wagered that our Supreme Court would gut the 1965 Voting Rights Act, invalidating section four and opening the way for conservatives to pass some of the most restrictive voting laws in the country? Within 2 hours of that court decision, Texas arranged a voter ID law and redistricting map both of which were blocked in previous years for their discriminatory tendencies against blacks and Latinos. It’s not like this should have come as a surprise, either. The Texas Republican Party’s 2012 platform specifically called for the repeal of the 1965 Voting Rights Act. The only people who didn’t see it coming, apparently, were the five Justices who concurred in the decision to gut the act. One must conclude they were willfully blind to reality, or criminally stupid, or, more likely, they were perfectly aware of the outcome, and that’s precisely why they formed their decision.

This brings us to an interesting question. Suppose the recent antics of the right aren’t just gross stupidity, poor analysis, or general loss of contact with reality? But, rather– it’s opposite. Suppose it is simply this: the right is actively seeking to disenfranchise millions of citizens to retain political power, keep sick people from adequate health care to ensure continued profits for a dysfunctional healthcare system, and weaken the middle class and labor movements so that big business–their primary constituent–can avail themselves of cheap labor in perpetuity.

If the latter is true, then maybe the activists in North Carolina have it right. The Reverend Barber and the NAACP have developed a sustained protest dubbed “Moral Monday” in reaction to anti-abortion legislation, voter suppression laws and cuts in public school teacher pay the conservatives of their state have enacted. Thousands have showed up at the North Carolina state house throughout the summer. Five thousand activists alone showed up in Asheville, North Carolina on Monday, August 5th. Close to a thousand have been arrested over the course of the summer in acts of civil disobedience.

“This is no momentary hyperventilation and liberal screaming match,” Reverend Barber told AP. “This is a movement.”

Indeed, it is. And with the racists-gone-wild antics of the right in Arizona, singing “Bye Bye Black Sheep,” outside one of President Obama’s speeches and carrying signs reading, “Impeach the Half-White Muslim!”, maybe it’s time to consider a nation wide “Moral Monday.”

After all, if the right isn’t entirely divorced from reality, their motives aren’t hard to decipher. Why gut the middle class economy, destroy any attempt at healthcare policy, restrict women’s rights, mock a black President and– a local note– plant a Confederate Flag just south of Richmond, Virginia (home of the ex-Confederacy, where millions of slaves were brought to be auctioned off to the highest bidder a little over 150 years ago) unless that is exactly what you’re seeking? To turn the clock back to that sunny time when blacks slaved like raisins in the sun, and poor whites were tenant farmers eking out a hard life’s wage, half of which went to pay their landlord? Sans any government protection, much less ‘healthcare’….This, after all, is the essence of the Confederacy, and, at bottom, the essence of the right-wing laissez faire economic model. It would not be the first time in human history that we’ve taken a step or two back.

Some folks might say I am exaggerating, because outside of a government predicated on a wealthy elite’s supremacy, the destruction of the middle class, the elimination of social services and the return of institutions that look and act like slavery or tenant farming, would the right-wing agenda really be all that bad?

I’m glad you asked, because even if we were to accept the feudal living arrangements the far right’s economic agenda promises, there is one other area where they would actually prove worse. According to the Texas Commission on Environmental Quality, 30 Texas towns are about to run out of water due to global warming induced droughts, and– wait for it — fracking. Why? Because fracking uses water humans need to survive. The oil and gas industries are draining Texas of water in order to break up the earth so that oil may be extracted to produce gas that runs cars that lead to global warming which further exacerbates the lack of water … that humans need to survive.

The oil and gas industries consider the cost of this degradation–that is, the draining of Texas’ aquifers so that humans have nothing to drink–an ‘externality’ (another word those smart MBA kids love); and to the extent that they think about them at all, most of the humans in Texas are probably also considered externalities, as are their children and their children’s children, etc… Except the fetuses, naturally. That’s just the way the far right rolls.

We could put this another way, of course. We could talk about the human cost of such a far right economic model that reduces humans to a plus or minus on a ledger sheet. We could suggest that, as humans, strictly speaking, we cannot drink oil, and we cannot eat money.