On the flat sweep of highway between Chaco Canyon and Taos, New Mexico, you may not expect to see much except desert and a few a scrub bushes under a pastel blue sky. You certainly don’t expect to see Hobbit like homes all bending toward the sun, like minarets awaiting their muezzins. They are spectacular against the endless sky, but the real surprise comes when you stop by to investigate. You realize something important: these singularly humble ‘Hobbit’ homes –also known as Earthships –may be a glimpse of our future.

Mike Reynolds, the founder of Earthships, first came up with the idea for these self-sufficient dwellings when Hurricane Marilyn roared through the Caribbean, destroying a quarter of the homes on St. Thomas, one of the U.S. Virgin islands. Full restoration of power took several months. Three thousand miles away, in Taos, New Mexico, Reynolds, read the news and saw a demand for a self-sustaining housing systems—what would later evolve into Earthships.

Traditionally, Mike Reynolds notes, most houses were built from whatever material was plentiful and fast at hand–trees, clay, grass (on the plains). In modern urban culture our most plentiful material is our non-biodegradable waste. Thus, he decided to use tires which will spend three times or more of a human life time making an eyesore of a valley or mountainside as the building blocks for his new-fangled Earthship.

The basic Earthship design is a U. The U design is based on three tire walls, built on the North, East and West sides while the South side is glazed and slightly angled to receive maximum sunlight. The concept is surprisingly simple and efficient: using the building walls and windows to collect solar energy during the day. The walls of an Earthship give back the energy later in the day when the outside air cools. Earthships are built from old car tires full of rammed earth, these are the load-bearing walls (that create the thermal mass). The walls that aren’t as structurally important get interesting aesthetic treatments; the most common of which is the use of “glass bricks”, which is a “brick” made out of two glass bottles, cut in half and duct taped together. 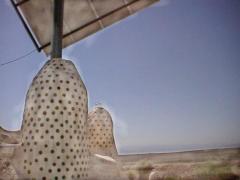 On to this mud, cement or adobe plaster is added. In addition, Earthship roofs can catch water when it rains and store it for later use in a cistern. Recycled greywater (from showers, dirty dishes, etc…) and blackwater (septic waste) are carefully separated. The grey water is fed into toilets for flushing and gardens where the waste is welcomed as nutrients to plants, and acts as a filter. The black water is broken down in an external solar septic tank which accelerates the anaerobic process by heating the waste with solar energy. The solids break down and travels through filtering layers of gravel, pumice, soil and roots where it is absorbed by plants and cleaned. Energy is provided by solar panels and/or wind generators stored in batteries. Methane gas from the breakdown of black waste can be stored for emergency energy needs.

The interior is comfortable and spacious. The rounded walls indeed give it a Hobbit feel, but this is a plus not a minus. One senses a return to a natural order living in the Earth, as this Earthship does, rather than on top of it.

Earthships also have extensive gardening beds to reduce the need to rely on grocery stores for food. There are raised beds, roof top plots and indoor greens. All this, and the most expensive of all Earth ships is a mere $70,000 (excluding labor costs). The average pricing works out to about $120 per square foot. If you provide your own labor, of course, it’s less.

In The Legacy of Conquest, Patricia Limerick writes of the western pilgrims leaving great heaps of tin cans outside their little shacks. “Living out of cans,” she notes, with a bit of irony, “the Montana Ranchers were typical Westerners, celebrating independence while relying on a vital connection to the outside world.” Not unlike the ‘independent westerners’ of today, who take to the Rockies in their SUVs, powered by a web of connections that reaches all the way across the oceans to cluster bombs in Iraq.

“The [modern housing] systems give us power on one hand and poison on the other,” Mike Reynolds notes, “Acid rain, radioactive waste, spider webs of power lines, polluted rivers and oceans, vanishing wildlife are all part of the ‘price’ for the life support systems necessary to make the current concept of housing functional. A person on life support in a hospital has to always be within reach and ‘plugged in’ to the various systems that keep him/her alive. So it is with our current concept of housing.”

Earthships incorporate systems that are external to most traditional house designs. Thus, they are self-sustaining.

There are Earthship colonies in climates ranging from the deserts of New Mexico to the high humidity of the United Kingdom, Brighton and Edinburgh. There are also Earthship enclaves near the tropics in Honduras, in Bolivia and Mexico.

For those who can’t feature themselves as over cautious environmentalists, and like, instead, to consider themselves ‘rugged individualists’, consider this: Earthships are the ultimate in an individual’s great goodbye to the systems that would otherwise keep them enslaved. Much more rugged and individualist than certain Montana Ranchers who ‘conquered’ the West while leaving behind their ‘externalities’: waste trails of empty tin cans.

~~~
Thanks to Stefan Reed, APV’s Deputy Director of Environment and Clean Energy Task Force, and Jack Johnson who visited the Earthships in New Mexico and also took the photos.