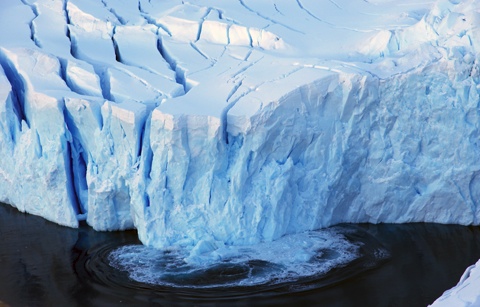 A wonderful photograph floated around the time of the 2008 bank bailout crisis, with an image of one of the big banks on Wall Street in front of which is a hand-held cardboard sign reading simply, “Jump, you fuckers”….The ongoing ‘serious people’ discussion surrounding the so-called ‘fiscal cliff’ deserves the same response. Our social safety net doesn’t need cutting; our debt can survive just fine as it is (at least in the short-term), and if taxes go up on the wealthiest 2% in this country, so much the better. I’m sure Republicans will find the political will to reduce taxes for everyone below that threshold, once the ‘cliff’ has been summarily ‘crossed’; and if they don’t, come election time, we’ll find ourselves with that many fewer Republicans. Again, a winning situation. So, let’s not talk in fearful tones of the fiscal cliff—let’s instead talk about the much more important carbon cliff we’re about to step off.

Last week, in Doha, Qatar, the survival of the human race was being decided by diplomats from around the globe. You would never guess that from the press coverage the climate talks have garnered in the US media, which approaches nil. Yet the stakes are incredibly high. Much higher than the hand wringing kabuki surrounding the fiscal cliff. There is ample evidence that if nothing is done on the way to the carbon cliff, our comeuppance is going to be immediate and devastating– for ourselves and future generations. In fact, it’s already here. The unhappy statistics are well documented, and I posted some links below for those interested.

An unseasonably warm winter means children can swim in Lake Michigan in December, but we’ll suffer super droughts and super storms, with poorer undeveloped nations suffering disproportionately. According to the National Oceanic and Atmospheric Administration, 2012 will almost certainly be the hottest year on record for the continental US. “After a warmer-than-average November, only an exceptionally-cold December could prevent 2012 from being warmer than 1998, the year that currently holds the record. In 2012 Arctic sea ice also hit a record low, covering only 24 percent of the Arctic Ocean. The previous low was 29 percent, set in 2007. Additionally, the amount of greenhouse gasses in the atmosphere increased by 3 percent last year, which makes it almost impossible to keep global warming to only a couple degrees, according to climate scientists.”

In its World Energy Outlook report, the International Energy Agency cautions that, unless world leaders take bold action by 2017, all of the carbon emissions allowable by 2035 will be “locked in” by existing energy infrastructure. Indeed, both the IEA and professional-services firm PriceWaterhouseCoopers warn that business-as-usual emissions will cause an increase of 4-6 degrees this century. Moreover, the UN Environment Program’s recent Emissions Gap Report highlights the inadequacy of global carbon-reduction efforts, noting that the concentration of greenhouse gases in the atmosphere has increased by 20% since 2000.

In the face of certain climate devastation, the talks at Doha were utterly supine. Rather than strengthen the Kyoto protocol, backers of Kyoto will dwindle from 2013 to a group including the European Union, Australia, Ukraine, Switzerland and Norway. Together they account for less than 15 percent of world greenhouse gas emissions.

Of the original Kyoto group — Russia, Japan and Canada — are pulling out, saying that it is time for big emerging economies led by China and India to join in setting targets for limiting their surging emissions. The United States, of course, signed but never ratified Kyoto.

The only silver lining? Under an extension agreement reached Saturday, there will be a possibility for tightening targets in 2013 and 2014. The conference agreed to hold a first session of talks from April 29 to May 2, 2013, in Bonn, Germany, perhaps another in September 2013, and at least two sessions in 2014 and two in 2015. In short, they kicked the carbon cliff can down the road.
The conference did not oblige developed nations to give a timetable about how they would achieve a promised tenfold increase in aid to $100 billion a year by 2020 (originally agreed to in 2009—by, among others, Secretary of State Hillary Clinton). In fact, with regard to financing, the focus shifted from building alternative energy infrastructure, carbon sequestering or mitigation to ways of salvaging civilization from the devastating effects of climate change AFTER it occurs.

Curiously, like our market driven healthcare system, rather than treating a diabetic’s diet we are waiting until the effects are so dire that the patient’s foot or leg needs amputation—and only then will we be willing to pay for it. This is the worst sort of short-term thinking, driven almost entirely by a narrow view of the immediate bottom line. With just a little political will and foresight we could set up a carbon tax, eliminate our ridiculous subsidies for fossil fuels (a perverse incentive if there ever was one), and use the subsequent freed up funds to invest heavily in solar, wind and other carbon free or carbon neutral technologies creating a green jobs boom in the bargain. The EU is well on the way with such a program, but the largest economy on Earth right now, next to China, has refused to budge. The result is inertia at talks where bold action was the only rational course: what amounts to a death wish for the world.
Jared Diamond author of Collapse has a video out in which he makes a point that is painfully obvious:

Why didn’t the Mayan kings just look out the windows of the Palaces and see the forests getting chopped down, soil being eroded down at the valley bottom. Why didn’t the kings say `stop it’? Well the kings had managed to insulate themselves from the consequences of their actions – in the short run. Even while the forests were being chopped down, they were still being fed well by the commoners, they were in their wonderful palaces. And the kings didn’t recognize that they were making a mess until it was too late, when the commoners rose in revolt.

Similarly, in the United States at present, the policies being pursued by too many wealthy people and decision makers are ones that — as in the case of the Mayan kings — preserve their interests in the short run but are disastrous in the long run.”

Meanwhile, our ridiculous media stoke fears of a politically generated fiscal cliff which is almost wholly fabricated in DC while ignoring the very real carbon cliff that increasingly threatens every citizen in the world.