May Day. We’ve been here before.

Last year on this day, Occupy called for a General Strike and created a series of posters surrounding the event. Although no general strike has been called this year, there are events being held across the nation–and across the world– in honor of the Haymarket Riots and in protest against the austerity measures that continue to cripple the world economy.

From Spain to Greece activists are taking to the streets. Thousands of protesters marched in Madrid, snaking up the Gran Via central shopping street, waving flags and carrying placards reading “austerity ruins and kills” and “reforms are robbery”.

Trains and ferries were canceled in Greece, and bank and hospital staff walked off the job after the main public and private sector unions there called a 24-hour strike, the latest in a string of protests in a country in its sixth year of recession.

Tens of thousands marched in Italy’s major cities to demand government action to tackle unemployment – at 11.5 percent overall and 40 percent among the young – and an end to austerity and tax evasion. Most marches were peaceful, but demonstrators in Turin threw hollowed eggs filled with black paint at police.

In New York City and LA, Occupy has called for a much needed ‘celebration’ from the work day. Below is a little history on the origins of May Day and some clever posters put together to celebrate last year’s General Strike.

We’ve been here before. About 126 years ago, thousands of workers and their families were marching through the streets of Chicago on May 1st, 1886. It was a Saturday. Everyone left work, because in those days people had to work on Saturday. They were working a ten- and twelve-hour day. Most of these people were immigrants, and they were fighting for an 8 hour work day rallying in Chicago’s Haymarket Square. It was near the end of a fairly successful rally, when about 176 police showed up, uninvited.

Yes, we’ve been here before.

The police captain had actually disobeyed the orders of the mayor, who said, “The rally is peaceful. There’s no need to disperse it.” The police captain acted on his own, marched right up to the crowd and said, “You must disperse,” and the speaker said, “But we are peaceful.” And he said, “You must disperse anyway.” And as the speaker was coming down from the wagon, someone — and to this day, we don’t know who it was — threw a bomb that landed into the ranks of the police. One officer was killed immediately. Six others later died.

The police were panicked, of course, almost hysterical. They’d never expected anything like this, began firing, probably shot each other, shot people in the crowd, and in the end, seven police died and at least three of the demonstrators. Many, many people were wounded, and later seven anarchists were fingered for trial, although no conclusive evidence was brought to bear. May Day became a global labor holiday in honor of the “Haymarket Martyrs” who were tried by a judge so prejudiced against them that their execution has often been referred to as “judicial murder.” More importantly, May 1 became a traditional day across the world to honor workers rights.

Occupy’s call for a General Strike this May 1st is the latest in a long series of actions against a system designed to marginalize workers and the poor. As they put it on their website:

“The General Strike is a demand for good jobs and good pay for everyone on the planet–citizens of the country they work in or not. Outsourcing will no longer be tolerated by the so called “job creators” for cheap labor. All human beings deserve a living wage. Education, Housing and Healthcare are human rights NOT ‘entitlements’.”

That might sound a little far fetched to our contemporary ears, but so did the idea of an 8 hour work day and time off for weekends to those who started protesting some 126 years ago.

Below are some of the more creative posters Occupy has produced in their effort to agitate for a General Strike on May 1st, 2012 with some observations and historical notes. 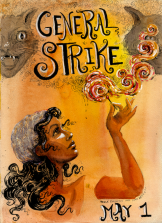 1) In the 1700s, sailors would sometimes strike or lower their ship’s sails as a symbol of their refusal to go to sea. From this refusal to acquiesce with the requirements of the work day we get the term ‘strike’ and this poster playfully toys with both meanings. In 1888, young girls in London were forced to dip matches in dangerous white phosphorous for 14 hours at a stretch. After one of their numbers was unjustly fired, they went on strike. Thus the match blossoming with the starry night flame indicates both the match girl’s strike of 1888 and the underlying flame that occurs when a match is struck. Floating in the upper darkness of the poster are two cats. A general strike—which is what is being called for—is also sometimes termed a wild cat strike because it is not authorized by a union and hence is ‘wild’. Anarchists and IWW affiliates will often use cats or sabot-cats in their graphics as well. The woman is likely either Hispanic or Afro American; both races (and gender) have been roundly abused by a system that would rather produce matches than well rounded humans. 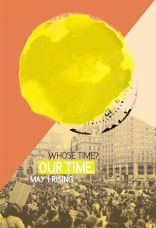 2) Time is money wasn’t always the case. There was a time, well before the advent of industrialization and what we have come to call ‘time discipline’ when biology and nature ruled our internal clocks. If you were a hunter or early farmer, the shifting of the seasons, the rising and setting of the sun was your only ‘clock’. In fact, time in hours and even minutes has become the single most used measurement for tying labor to value (justly or unjustly). With background colors reminiscent of a naval signal flag (an inverted man overboard, perhaps?), this poster features a brilliant sun eclipsing a clock, telling the world that for at least one day, the tyranny of time discipline will be thrown off. Says Jess Goldstein of Occuprint: “To me, this really sums up the spirit of a general strike; it’s a call to realize that we, collectively, can and should be in control of our time.” The poster’s words echo the famous street call and response….: whose time? our time! Whose street? our street! Of course, only time will tell.

3) The Guy Fawkes mask, celebrated in the movie V for Vendetta, and becoming a

near universal symbol of rebellion, has also been closely associated with the hacking collective known as Anonymous. Both Ad Busters (the Canadian anti-advertisement collective) and Anonymous have been the moving spirit if not direct organizers of the original Occupy Wall Street. The poster artfully uses an old arcade video game metaphor to shout out the relevance of computers to the Occupy movement. The words, Hack The Day, are a reminder of Hacks twofold meaning in both the virtual and wider world. Commonly, a hacker is someone who breaks into or disrupts normal operations—fitting perfectly with a call for a General strike. But perhaps, more importantly, a hack is also a provisional solution to a systemic problem. One thing we’ve seen over and over again at the Occupy sites is the brilliant and provisional nature of their solutions to restrictions imposed by a mostly antagonistic environment. Fittingly, the Wall Street Bull looks as though it is being levitated or is under attack by a Guy Fawkes mask.

4) Flowers jamming the cogs of a machine represent one approach to a general strike, taking time away from ‘productive work’ that profits others to simply grow on our own. This self oriented activity has another consequence—it fouls the smooth working of a system that depends on our devotion to its functioning. It’s also reminiscent of Mario Savio’s famous 1964 speech at The University of California’s Sproul Hall: “And you’ve got to put your bodies upon the gears and upon the wheels, upon the levers, upon all the apparatus, and you’ve got to make it stop. And you’ve got to indicate to the people who run it, to the people who own it, that unless you’re free, the machine will be prevented from working at all.”

To extend the metaphor in the image, our bodies are those flowers.

5) One of the more fun (and subversive) posters, this one was developed by the Institute for Experimental Freedom (the small publishing collective who put out the brash but fun-filled insurrectionary text “Politics Is not a Banana.”) asks us to replace the main image with some sort of “riot graphic” while using the 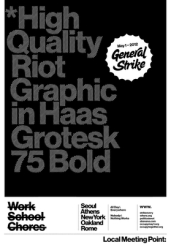 appropriate, hip font (Haas Grotesk). At first blush, a kind of meta joke, it’s also got a point: everything about this strike and Occupy is essentially do it yourself. That’s not just an accident, it’s by design. Part of the rationale comes from a deep historical awareness of how other movements have been co-opted in the past; the symbols and fashion of a movement become commoditized, while the underlying reality and message is diminished or crushed. Ad Busters, among others, is especially sensitive to the phenomena. This poster seems to be going on the offensive. Note the Coca Cola style font and bottle cap design that surrounds the General Strike notice. It would be interesting if a set of images could retool major corporate ‘brands’ with subversive messaging. A Pepsi shaped bottle with a General Strike Message in it, the Wal-Mart smiley face, announcing the next round of boycotts against that behemoth. None of this would be exactly ‘legal’ of course, but maybe that’s the point.

6) Intentionally or not, the refrain, Let’s go fly a kite, belongs to a song that forms the climax to Disney’s Mary Poppins. For those who haven’t seen the movie in a while (has anyone not seen it?) Flying a kite becomes the ultimate resolution of the family tensions that bind the banker (Mary Poppins’ employer) to his family while rejecting his work life. That particular plot is an old cliché, but, as with most clichés, there’s more than a germ of truth to it. The song and characters in the movie, like the kites, offer wonderful overtones of an existence not tethered by work day concerns—liberated, floating and free. Flying a kite is just one possibility of things that can be done once the carefully enumerated list of modern distractions are abandoned: No work, no school, no housework, no service, no banking, no shopping, no data. For those who haven’t seen the movie or this clip, enjoy: Let’s Go Fly a Kite!

7) In the popular idiom, a general strike is as old as the hills, or at least as old as 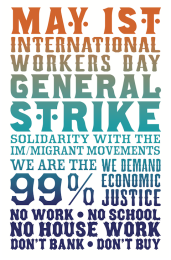 the hills of Rome. According to H.G. Wells, the first general strike properly took place in Rome by the lowly plebeians. The plebeians “saw with indignation their friends, who had often served the state bravely in the legions, thrown into chains and reduced to slavery at the demand of patrician creditors.” For veterans of the Iraqi or Afghanistan wars this might sound eerily familiar. In the U.S., one of the first general strikes was the infamous Railroad Strike of 1877. This was, in infancy, the beginning of a nascent labor movement showing its muscle across the nation, culminating ultimately in the May 1, Haymarket strikes and riots that led to the weekend, child labor laws, and the 8 hour day. The typeface is just a reminder how far things have come, and sadly, how far we still have to go. What this poster delivers in simple type face is almost as important as the message itself: We’ve been here before.