Adoption in Virginia – What a mess!

Scenarios:
John has been in the system for a long time. He’s troubled and shows it by getting in trouble. No one has been interested in adopting him since he was twelve, and the situation is getting worse as he ages. A lovely dedicated couple who have worked with troubled children for many years decide they’d like to adopt him, but the agency won’t allow it because they don’t want John to be influenced by Jews.

Susie has a disability that requires medical treatments. A few couples thought about adopting her, but they didn’t because of the necessary modifications for her wheelchair and the concern and expense of her health care needs. Gail, a nice widow of 60 and a nurse with the resources and background to offer Susie a good home and stable life, is turned down by the agency because she isn’t married. Or, it could be because Gail is over thirty, or because she’s not a Republican, or because she’s a woman, or because she doesn’t believe in corporal punishment ….

Sam and Mack are well-respected and known assets in their community as well as their church. They’ve been stable partners for 14 years and have a successful landscaping business. After long consideration, they apply to be foster parents for Jake, a homosexual teenage boy in crisis counseling for a suicide attempt. Everything about Sam and Mack checks out, but the caring, understanding home environment and healthy role models are rejected by the agency, preferring to “cure” Jake with prayer treatments and anti-gay conversion therapy. LGBT children make up a significant number of available adoptees.

Nick and Caroline own a convenience store next to their home. Caroline is a teacher. They’re not rich, but they’ve managed a nest egg that will allow them to raise a son and put him through college. Everything looked great until Nick told the agency that he hoped his son would want to serve our country in the Marine Corps, as he did. The adoption is denied on moral grounds.

A decision made by the State Board of Social Services in December allows state-licensed private adoption and foster care agencies to refuse prospective parents based on sexual orientation, religion, age of the prospective parents, gender, disability, family status or political beliefs.

APV fought that decision tooth and nail, and like a lot of people in Virginia, we can hardly believe it went through. But it did, and to solidify it into law and make it even worse, we have HB189 and SB349, which are due to be signed by Governor McDonnell. Here’s what we’re fighting in Virginia adoption law now:

Sen. John S. Edwards, a Democrat from southwestern Virginia, said, “This bill treads on thin ice. It confuses the right of a person to hold their own religious views, which is sacred, and imposing those views on someone else.”

“Be it therefore enacted by the General Assembly, That no man shall be compelled to frequent or support any religious worship, place, or ministry whatsoever, nor shall be enforced, restrained, molested, or burdened in his body or goods, nor shall otherwise suffer on account of his religious opinions or belief; but that all men shall be free to profess, and by argument to maintain, their opinions in matters of religion, and that the same shall in nowise diminish, enlarge, or affect their civil capacities.

And though we well know this Assembly, elected by the people for the ordinary purposes of legislation only, have no powers equal to our own and that therefore to declare this act irrevocable would be of no effect in law, yet we are free to declare, and do declare, that the rights hereby asserted are of the natural rights of mankind, and that if any act shall be hereafter passed to repeal the present or to narrow its operation, such act will be an infringement of natural right.”

The state’s contractors are not entitled to this protection. They’re not people. It’s not about their freedom of religion because adoption is a public act. Nor, as contractors, should they be granted permission to impose their stated religious beliefs on adoptive children who are covered by the statute. Virginia’s children, if “compelled to support … religious worship, place, or ministry” would be wronged, and “such act will be an infringement of natural right” in the state of Virginia.

Should Virginia’s parentless children have a guardian ad litem to oversee their foster home and adoption applications? What about the suffering experienced by children forced to live in group homes unnecessarily? A child’s needs and rights should be protected from any agency choosing to put into peril available opportunities for a stable home and family life.

Just as troubling, or more so, is the vague wording about “moral convictions or policies”. In context, we’re not talking about virtue-centered morality for the good of community. This is “rights-centered” morality stressing individual freedom, which can be anything. The way this bill is written, an agency can write down a list of preferences, call it moral conviction and policy, and they’re free and clear to prohibit adoptions based on whatever is on the list.

Examples of unregulated rights-centered morality issues are as common in this country as being anti-war or believing in corporal punishment; as controversial as reproductive rights for women; or as egregious as the applause in recent debates has indicated for allowing people to die because they have no health insurance. Polygamy is a regulated religious practice in the U.S., but arranged marriages are not.

The point is, the law will relegate a critical public responsibility, the placement and future of Virginia’s adoptive children, to contractors with a variety of religious and moral agendas, and who also accept taxpayer dollars to subsidize each child’s care.

Who is designated to stand up for our children when agencies fail to act in their interest? The checks and balances have been defunded and cut back to the extent that a handful of dedicated, overworked social workers and CASA volunteers must simply do the best they can with a massive workload.

It doesn’t make good sense to keep adoptable children in the system when healthy loving people are willing and able to care for them, embrace their differences, and provide the home and family life they have to share. The moral or religious preferences of an agency are not important. This is supposed to be about the children, and if the agencies had their hearts in the right place, they would insist upon safe and healthy placement regardless of their list of convictions and policies.

This is bad law being pushed through by moralistic people in power who want to force their agendas on others.

But, back up a minute … what about the very real suffering and damage done to a child who is kept in the system unnecessarily? Well, that potential damage was obvious and looming enough for the authors of this bill to include sweeping immunity for the very contractors that should be prohibited from discriminating for their personal whims in the first place. It states that restrictions on adoption under “…written moral or religious convictions or policies shall not form the basis of any claim for damages.”

Hopefully, that would be challenged and decided by the courts, and maybe it would result in adoptable children being assigned a guardian ad litem. But, preventively, this legislation can be vetoed by the governor. 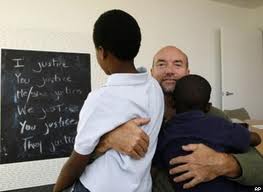 If the bill is signed, adoptable children in Virginia will pay the high price of being political, religious and moral pawns in a system already looking the other way when it comes to meeting many of their needs.

Please consider their interests and let Governor McDonnell know where you stand before it’s too late. Contact the Governor’s Office at (804) 786-2211, sign a petition here, and contact your representatives to let them know how you feel.
Thanks. 🙂